What Is A Billboard?

A billboard is a large outdoor board for displaying advertisements.

Wikipedia further defines a billboard as:

“Billboard” is an American English term dating to 1845 meaning “any sort of board where bills were meant to be posted.”

The first large scale use of the billboard as an advertising tool was as circus posters printed or secured on horse-drawn trucks that would precede a show to town in order to increase interest and attendance.4

What Is Billboard Advertising?

Billboard advertising is a traditional form of Outdoor Advertising Media.

“Out of Home” Ads

OOH advertising is also referred to as:

Regarding the billboard seen in Figure #1, and according to the AL.com article “Alexander Shunnarah legal empire built on thousands of billboards”:5

Shunnarah has… a massive advertisement campaign with 2,000 billboards…

The Outdoor Advertising Association of America (OAAA) is the national trade association for the out-of-home (OOH) advertising industry.

OAAA is a unified voice, an authoritative thought leader, and a passionate advocate that protects, unites, and advances OOH advertising in the United States.

There are a multitude of outdoor advertising options, all of which offer their own unique impact:

Many outdoor media options are available as multimedia, digital displays.

Traditional media is often ignored or tuned out, but careful marketers might benefit from the results offered by advertising billboards.

The billboard ads that line our highways and populate the city landscape offer a glimpse into our national psyche. Billboards are our latter-day town criers that announce what’s hot and what’s not; they define the trends, anoint the celebrities, and create the buzz.

Brands are built on our roadways, where your audience is receptive to buzzworthy advertising that billboards have always offered. Billboard signs quench our thirsts, cure our aches and pains, and help us decide what to eat, all while fashioning brands into household names.

At times, they act as guides, directing us to hotels, eateries and amusements. Billboard ads help us find businesses and services and help businesses find customers.

Offering a reflection of our time, place, and mood, billboard advertisements are outdoor’s great communicators.

How much does a billboard cost in Montgomery, Alabama?

Billboard lease rates depend on your marketing budget, what you want to achieve, and several other factors, including:

For details about billboard pricing, contact one of several outdoor billboard advertising companies in the Montgomery, Alabama metro area. 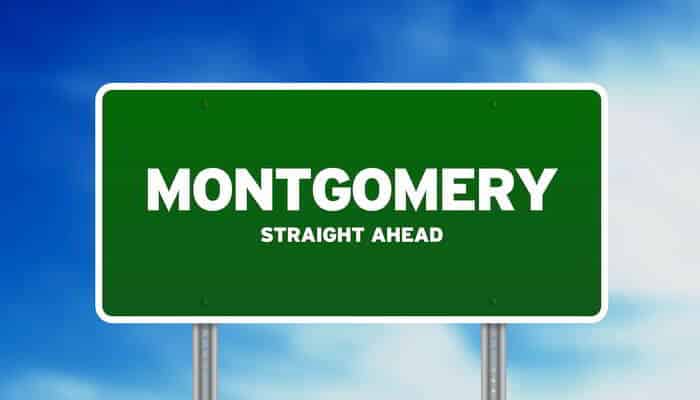 Bulletins are some of the most cost-effective and noticeable advertisements.

Bulletin advertising puts you in touch with our increasingly mobile population – and with adjacencies to major shopping areas, billboards are the perfect point-of-purchase media.

Month-long presence and tremendous visibility to vehicular traffic allow billboards on highways to reach on-the-go commuters and influence their purchasing decisions at just the right time.

Offering one of the largest formats for creative advertising, bulletin advertising provides the high-impact canvas you need to make a major splash in your market. 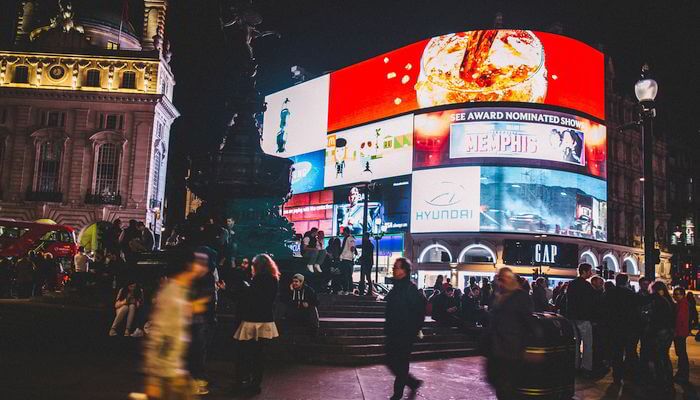 Digital billboards have revolutionized the industry with cutting-edge digital technology and premier locations in the most desired markets.

Digital billboards have brought Out-of-Home advertising to a whole new level. With the latest eye-catching LED technology, and locations throughout the most in-demand markets in Alabama, LED signs have streamlined the Outdoor advertising industry.

With messages that are easily changed, you can display different ads at different times of the day during your electronic advertising campaign, making your message not only relevant but timely.

Posters are typically made of polyethylene printed copy (some are 100% recyclable) and are highly visible to both pedestrian and vehicular traffic.

These big, bold, and environmentally friendly boards are visually superior to traditional 30-sheet posters – regardless of weather conditions.

Posters are seamless, guaranteeing consistent color tone across the surface of the board. Neighborhood penetration makes posters the ideal point of purchase media. Demographic- specific locations bring your ad directly to your target audience.

Achieve dramatic large-scale impact and frequency with multiple units strategically located to maximize your advertising potential for both local and retail advertisers.

Junior Posters, or Jr Posters, are about half the size of a regular poster and typically located along primary and secondary roadways in urban areas.

Jr Posters are highly visible to vehicular traffic and offer point-of-purchase opportunities for local businesses to drive traffic to their stores.

JR Posters can target neighborhoods, shops, and diverse areas. Their smaller canvas allows these signs to be placed in local neighborhoods where bulletins and posters are zoned out.

Wall Billboards, also referred to as “Wallscapes” and ”Wall Murals,” are affixed to buildings in heavily trafficked areas and visible from a great distance.

Walls offer the exact type of high-impact advertising that billboards are known for in major metro areas.

According to Wikipedia, Transit Media is:

Various types of transit media are available to advertisers.

Whether you’re looking to target a bus-friendly audience or a rail/subway-friendly audience, Transit Media can bring your message to their eyes in a powerful way. Transit display advertising has adapted to make an impact on an increasingly youthful and difficult to engage demographic.

Most outdoor advertising vendors carry a strong inventory of interactive and digital media for transit sign advertising that’s sure to keep your message strong in the minds of consumers between and during daily commutes. 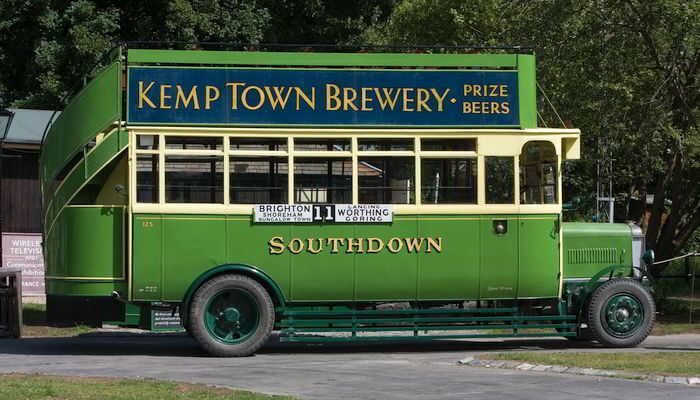 Buses go where people go – where they live, shop, work and play – and so does the advertising on buses.

The strength of a bus transit display is its constant ability to find a crowd. A bus transit sign “mingles with consumers,” and follows the flow of shoppers and their spending power – speaking, showing, and selling along the way.

A bus ad ignites trends and fuels demand for the products and services they promote as they connect the dots between where the journey begins and ends.

Advertising on buses builds and reinforces brand images as they go with the flow. 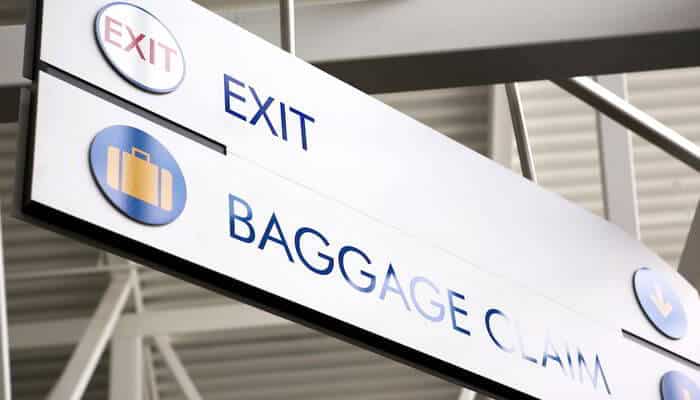 Airport advertising is positioned in the common areas of transit stations, terminals, and airports.

Interior displays can be freestanding or affixed to terminal walls, windows, columns, ceilings, or floors.

Airport Advertising is located throughout the terminals and concourses:

The majority of interior airport displays are backlit. Exterior displays are available along airport/terminal roadways as billboards, LED, or overhead signs.

Is Billboard Advertising Right for my Business?

It depends on many factors.

Billboard Tracking Tip: Regarding bullet #3, using a vanity phone number or custom domain name helps you track your return on investment (ROI) by providing a unique identifier so you can monitor how your customers learned about you.

Vanity phone numbers and domains are also eye-catching, contribute to your branding, and help people remember your business.

What is the 2017 market share for outdoor advertising expenditures compared with other marketing channels? 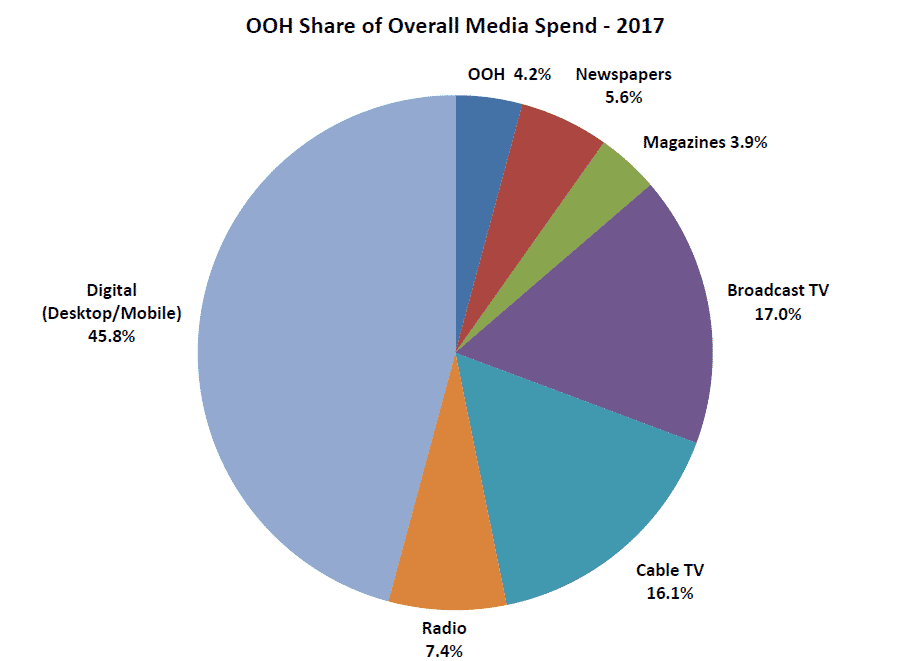 Bizeeo™ enables motivated buyers to find your business, products, and services when and where their search begins.